Building a Case for a Serpent, Part I

In order to attempt longer and more adventurous Snake On A Bike journeys, I want to build a better case for Charlie the Serpent. The existing case is a box, lined with blue muppet pelt, with some padding on the two largest sides. But there's nothing that really holds the instrument securely within the box, it is very heavy, and the box itself is worryingly flexible. It has all the weight of a hard case with the reduced protection of a soft one, and while it is well-made, I'd worry taking it very far on even the most loyal and reliable bicycle.
So I'm out to build something better. This is going to be interesting -- most of the tools (and expertise) I need are at London Hackspace, but I want to cycle there rather than taking public transport as it is a much more convenient journey. And I won't take the serpent that far on the bicycle. There's a hole in my bucket... To reduce much to-ing and fro-ing with a serpent case in varying stages of completion strapped to my bicycle, I've made a cardboard dummy I can fold up and take with me: 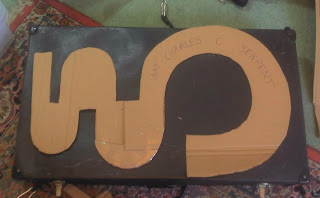 My plan is likely to change as I go along and may end up adapted as I find or think of better ways of doing things. The general idea is to make a hard shell, then half-fill it with expanding foam insulation, carve a serpent shape out of the foam, cover that with film and repeat for the other half which will be attached to the lid. I'll line the expanding foam with some softer foam padding and either muppet pelt or some other soft cloth. Then I need to attach the lid to the case -- I am thinking a cloth cover for the whole lot, with a waterproof zip around the edges as well as some webbing straps, would be good. It will need a handle, too. And of course I'll put reflective strips on, and places for attaching bike lights.
In addition to this case being stronger and more protective than the old one, I'd like it to make better use of space. The rectangular box is a good shape to work with (and great for busking as the lid can be used to display information while the bottom collects money) but as the serpent narrows at one end there is a fair amount of wasted space. I haven't decided whether I should make a trapezoidal case, potentially easier to fit onto a bicycle, or stick with rectangular which will be much easier to build; most of the bits and pieces I need to carry on a regular basis with the serpent can fit inside the largest curve of the instrument, except a music stand, but that won't quite fit in the "wasted" space in a rectangular box anyway.
Here are the materials I've gathered so far: 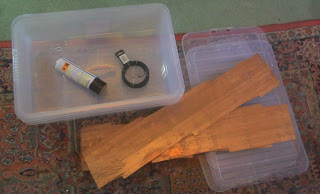 Here is a picture of the three lids fitting over the bottom half of the existing case: 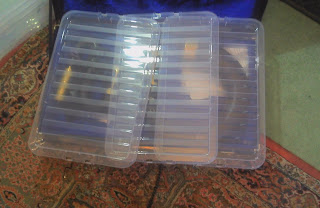 As you can see, I'll be able to overlap the plastic considerably.
The storage boxes and lids have lips which will get in the way, so the first thing is to cut those off. The resulting angular bits of plastic can go inside the shell, at corners and vertically around the edges, to provide additional reinforcement.
That's all for today; I'm not sure when I'll next have a chance to work on it, but will try to take pictures along the way.
Posted by Kathryn Rose at 10:19

Great project! I'm curious now about how tough the plastic lids will be if you come off your bike. Is that too morose a thing to think? As I write this I'm thinking that I should re-read the relevant paragraph and make sure I have a clear and accurate picture of your design plans.... but I'm new to the Blogger comments interface and scared to navigate away. Oh well... good luck with the project. Great photos!

I'm a fairly cautious rider, and haven't fallen off a bicycle since I was about ten years old. I'm much more likely to get hit by another vehicle (though it hasn't happened yet), at which point any concern for the structural integrity of the instrument is rather overshadowed by my concern for life and limb.

That said, after chatting with a few people I'm thinking that the plastic is likely going to be too brittle, or decay too fast, so I'm thinking about some kind of sheet aluminium shell instead. Further posts on the subject to follow in due course!